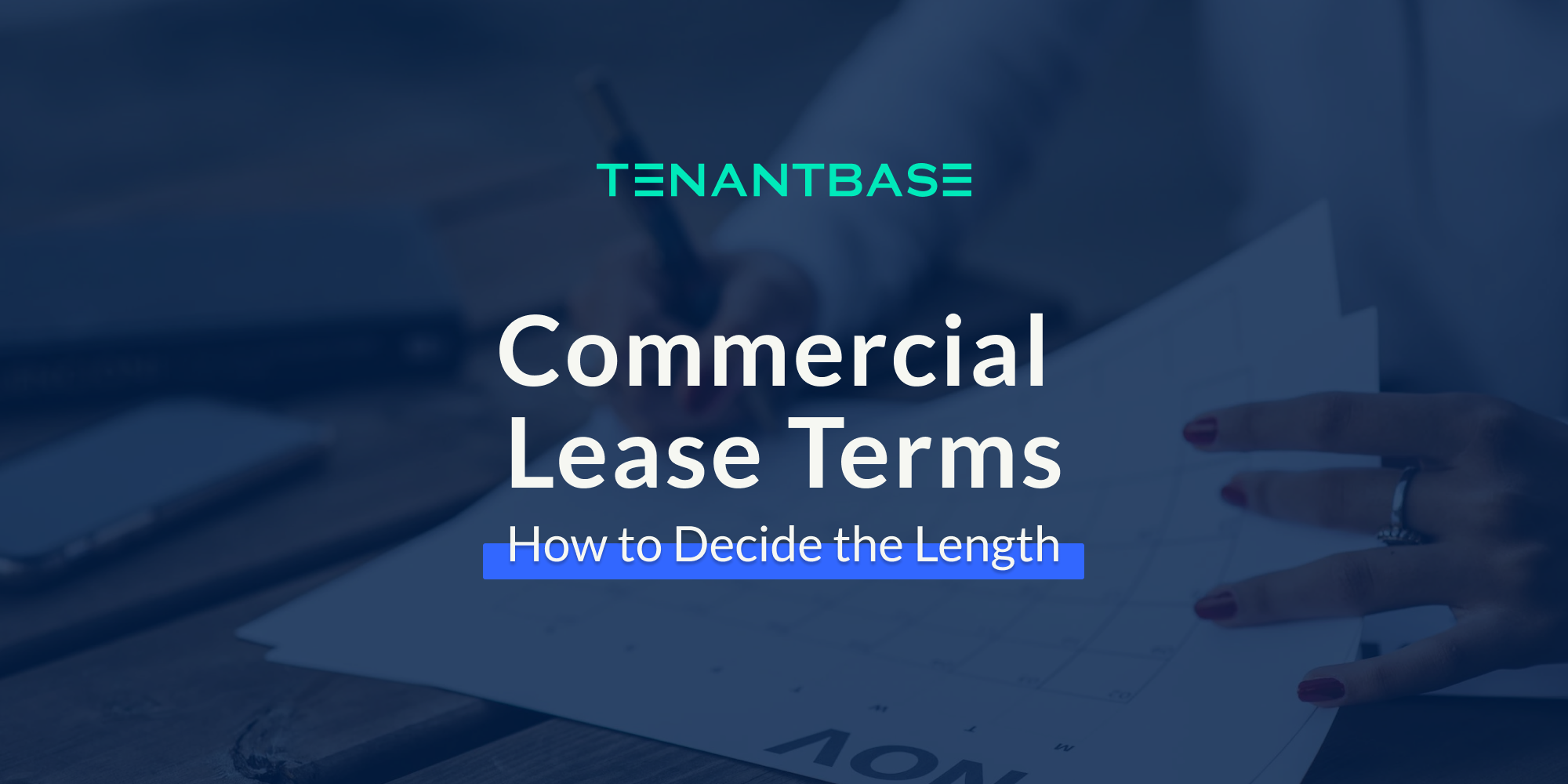 Of the many decisions involved in finding new office space – from the search itself, to lease negotiations, to a smooth transition between old and new spaces – choosing the most appropriate lease term length is amongst the most important but can often be overlooked.

Based on several different factors, including budgetary constraints and projected growth, careful consideration must be made to the duration of your lease to ensure it doesn't inhibit cash flow but still provides ample room for expansion.

Given these important and varying factors, TenantBase has gathered a detailed list of the pros and cons for short, standard, and long-term lease options to make it easier for organizations to decide which of the three term lengths is most appropriate for their specific needs and expectations.

With our absolute expertise in the field – as well as our team of TenantBase advisors possessing the nuanced insight to help you make the best decisions for your organization – TenantBase can be an invaluable partner as you search and negotiate for office space that can help your company reach its goals and potential.

Typically between one and three years in length, short-term leases have specific strengths and weaknesses for companies. The rarest of the three options as many landlords are unwilling to sign short term leases, companies should carefully balance their pros and cons to make a fully informed decision that ultimately serves to their benefit rather than impeding their progress. Also, a short term lease does not lessen the landlords requirement to review the financial condition of the tenant.

For businesses that expect a significant amount of growth in the relatively near future – both in terms of employee base and production – a short-term lease provides maximum flexibility that allows a company to pivot accordingly when they outgrow the space. Startups, in particular, are drawn to short-term leases specifically because of this flexibility, affording them the ability to act and react to a volatile market that could provide either astronomical growth or catastrophic failure in a very short amount of time.

Likewise, companies that don't require much customization of the space – if any at all – favor short-term leases due to their move in readiness. If a long, drawn out redesign and overhaul of the office isn't necessary, there's far less incentive to signing a longer-term lease since the space is fully functional and ready to go the moment the new tenant steps in.

Along the same lines, short-term leases also afford companies the ability to rapidly scale up or down as the marketplace dictates, never growing deep roots in any particular location in case another move is in order. This ability is especially important for temporary or pop-up organizations that want to test the waters in a specific market before fully diving into the pool.

Conversely, if your company intends to customize the new office space according to your particular needs – even if they are only minor changes like paint color or other cosmetic improvements – a landlord will likely not offer a shorter-term lease agreement since they will be negotiating with new tenants for the same space within just a handful of years. Any significant amount of space customization will require a greater commitment of time on the part of the tenant.

In fact, customized design isn't the only benefit a landlord is unlikely to negotiate within a short-term lease. Lease price, allowances, and assorted perks like reserved parking places and months of free rent are also contract features that a landlord won't budge on if they know the space will be vacant again in a short amount of time. Simply put, such features don't make financial sense from a landlord's perspective when a short-term lease is involved.

Of course, landlords aren't the only party facing hurdles with a short-term lease. As the tenant, your organization will be repeating the time-consuming, laborious process of searching, negotiating, and moving into new office space within the relatively near future. As you already know, this process absorbs the already limited resources that otherwise could be devoted towards growth and goal setting. Working with your TenantBase advisor certainly lessens this time commitment, however punctual attention away from your core business will be required.

Aside from the obvious, other disruptions include changing the business's physical address, notifying all clients and vendors of the move, updated your Google listing City, State and Federal agency updates, and other assorted details that all require close attention. This activity can add up in both monetary costs and significant time. Since the research and leasing process should start six months before a projected move date, this doesn't leave much time to enjoy new office space before the search for the next one begins.

With so many factors that can negatively impact them, many landlords will only offer lease contracts that are 3 to 5 years minimum in length. Often times, if you are able to sign a shorter-term lease, it's likely you will renegotiate at higher costs once the initial contract expires. This provides a measure of financial protection to the property managers for the risk they absorb by offering the short term lease in the first place.

For these reasons, it is much more difficult to plan and coordinate for the future when you sign a short-term lease. Expenses aren't nearly as consistence since future lease payments are uncertain and, perhaps more importantly, your ability to renew in the same location is never guaranteed.

Usually between 3 and 5 years in length, standard term leases are a compromise in flexibility and predictability between their short and long-term counterparts. However, unlike the narrow scope of negotiated lease terms in shorter contracts, tenants that elect standard leases at least have some perks available to them.

Three to five years in duration, the standard term lease is long enough to provide some flexibility in negotiations and gets the landlord interested in you as a viable prospective tenant. Unlike a shorter-term lease, the standard term lease gives a tenant just enough leverage to push a landlord on improvement allowances or even negotiate the lease price on a square footage basis.

Likewise, a standard term lease typically means a landlord is more willing to use a turnkey arrangement that includes tenant improvements – as long as those improvements are within reason. While large, drastic changes to the design are still likely out of reach, the landlord should be more willing to negotiate limited changes to the office space according to a new tenant’s wishes the longer the lease agreement is.

In these instances, having a TenantBase advisor is especially important since they work on behalf of you, the tenant, and know what improvements can reasonably be expected according to the duration of the lease agreement and the local commercial lease market. For instance, rather than negotiating for a specific improvement allowance and hiring your own contractor to handle the renovation, a TenantBase advisor can negotiate a turnkey arrangement so the landlord gets all improvements completed on their own as a part of the lease agreement itself.

From a financial perspective, standard term leases shine with respect to shorter-term agreements since tenants are not subject to the price premium usually included in shorter leases. Of course, this also makes budget forecasting much easier for your organization since lease costs are far more predictable. Likewise, the prospect of having to relocate again within a short amount of time is effectively eliminated, creating another source of financial stability since the costs in time and money involved in moving are removed.

Despite the benefits a tenant can realize by signing a standard term lease, they lack the flexibility of shorter-term leases. Therefore, if your business changes drastically – either in terms of use or need – you might have to consider subleasing the space in order to fulfill the lease agreement while still finding appropriate office space for your particular needs. If you have outgrown your space and the landlord has a larger space available, they may negotiate something outside of the lease terms, however unamortised landlord costs will be factored as well as other considerations.

Although sublease provisions within contracts tend to be quite standard, make certain what your options are before attempting to sublease the space and potentially exposing your company to penalties or even legal action.

With limited flexibility but maximum options, long-term leases are those that are at least five years in duration and best suited for organizations with a clear vision of their future. Both restrictive and flexible in their own way, long term leases reward longevity but can be punitive when the unforeseen occurs.

Most of the benefits in long-term leases built upon those in standard term leases, particularly in the form of enhanced concessions, financial lease provisions, discounts, or months of free rent. Likewise, landlords will be willing to allocate more funds toward space customization. In fact, larger construction projects as well as any retail or restaurant venture will require a minimum five year lease.

Since long-term leases are preferred by landlords due to their predictability, most available spaces will be a viable option for you, the tenant, even if it's a shell of a space. In such cases, you can likely negotiate for most of the changes and improvements you desire.

Although long-term leases lack the flexibility to relocate in a short amount of time if needed, tenants will often find landlords much more accommodating to other lease terms, including exclusivity clauses and expanded sublease options.

Also, the nature of the lease itself makes it less likely for you to be moving into a new office space again at any point in the near future. This, of course, also makes budget projections much easier and more reliable due to the financial consistency of a longer-term lease.

As amenable as long-term leases might be towards tenant-friendly lease negotiations, they still have their drawbacks. In fact, the negotiations themselves can be very lengthy and drawn out due to the complex nature that often slows the entire process.

Even once the lease terms are agreed upon, a long-term lease also represents a significant financial commitment for the tenant, a factor that can be especially risky for a company that participates in a volatile industry like startup technology firms. You the tenant will be required to show financials to confirm to the landlord you are a viable tenant to make rent for an extended period of time. Financials must show stability within the company.

The epitome of a good problem to have, sometimes even growth can be problematic if you are locked into a long-term lease since you lose the flexibility to move into different markets or expand into a new location. To provide some leeway in such situations, some landlords will offer break options at particular times during the lease period to provide the tenant a chance to move if needed. Also, depending on the landlord’s availability in their portfolio they may be willing to work with you to expand to more space either in the building or in one of their locations.

Moving into new office space for your organization is too important of a moment to not pay close attention to the particulars. Choosing the most appropriate lease term lengths for your company's specific needs and expected growth can be challenging but, if you’re meticulous with your planning and negotiations, your lease term can work as a powerful benefit to you rather than a hindrance. As always, TenantBase is here to provide our expertise in not only finding the right space for your business but also negotiating terms that work for you and your goals.

How Online Reviews Will Boost Your Brand and Increase Sales